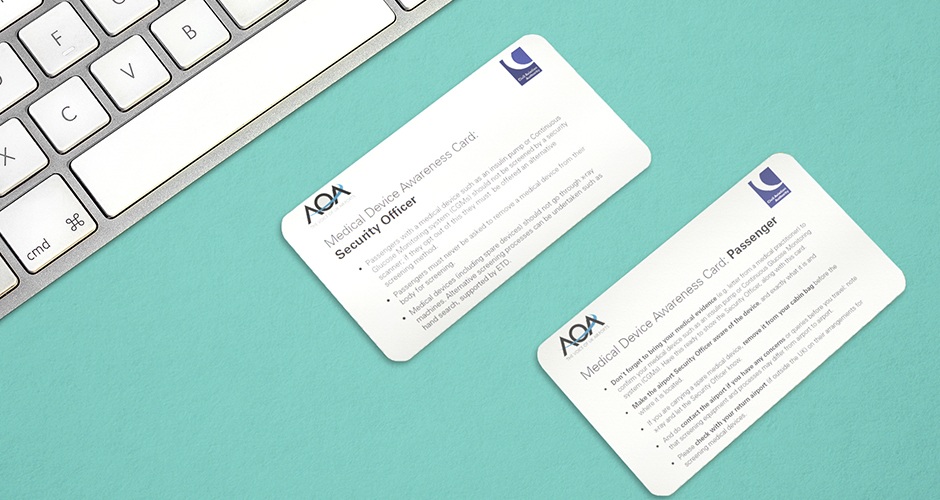 The Medical Device Awareness Card – to make life with an insulin pump easier.

My name is Rachel. My son, George, was diagnosed with Type 1 diabetes when he was eight, in 2010. After 3 years on MDI, we were able to obtain an insulin pump from the Royal Surrey Hospital under the care of Dr Sumner and DSN, Nigel Thorpe. It has given all of us the freedom and flexibility to help him live his best life with plenty of fun. That includes overseas adventures like a 1500 mile USA road trip (including a trip to Death Valley, one of the hottest places on earth). Also zip lining between 2 mountains at Whistler, hiking in Yosemite, white water rafting in the Rockies, paragliding in BC. It also allowed for regular martial arts training, without blood sugars getting in the way (too much)!

In 2016, our family was traveling through Dubai Airport on the way back from a family holiday. Unfortunately, it all turned a bit sour when we were held in an airport police room for over 2 hours. It made us almost miss our flight. All because of George’s insulin pump.

Here’s a little background info for you. Hospitals and insulin pump manufacturers advise that the electromagnetic radiation used in x-ray screening for carry-on and checked luggage may interfere with the motors of an insulin pump. This is also the case for full-body airport scanners. Obviously, anything that interferes with the pump motor could have a potential impact on the ability of the pump to do its job: deliver insulin. Because of that, insulin pumps shouldn’t go through the x-ray machines and scanners at the airport.

That’s how it started

Once we returned home, my anger didn’t go away. I decided to write an Open Letter to Dubai Airport. Research showed me that regulations do allow passengers with medical devices to ask for an alternative to the normal security screening process. Even though my family was denied it.

The campaign that I started to raise awareness quickly gained support. I spoke directly with major pump manufacturers, key NHS staff and security departments at most UK airports. Because I wanted to make sure that my family’s unpleasant experience wouldn’t be repeated. I wanted other young people like George to not have to go through that upsetting and potentially life endangering experience.

After reaching out to and gaining support from the CEO of the UK Civil Aviation Authority (CAA) and the Permanent Secretary for the Department of Transport, the campaign was gaining momentum! We had articles published with the JDRF, Diabetes UK and International Airport Review. They all highlighted the issues surrounding travel with a pump. It helped spread awareness about the correct protocols. The Airport Operators Association even sent a reminder of the regulations to all UK airports!

After I spoke with someone at the Airport Council International (ACI) World, they published an article called “Best Practice for Screening of Insulin Pumps” in their World Report. This was distributed to over 1800 airports in more than 170 countries across the world. ACI World also presented the issue to the International Civil Aviation Organization (ICAO) and member states of the Aviation Security Panel. These are the heads of global standards and recommended practices. As a result of our conversation, updated information was shared in the 10th edition of the ICAO’s Security Manual.

I was delighted with the progress of the campaign, but I was frustrated that it just wasn’t enough. I was getting messages from pump users all over the world. They were still having terrible, anxiety-inducing and dangerous experiences at airport security. Many pumpers were experiencing pump failure after being forced to go through the x-rays and scanners. These messages made it clear to me that this was an issue affecting 1000s of passengers every year. Some T1s even avoided certain airports, or became too anxious to travel by plane again. For George and our family, this just didn’t seem fair.

In December 2018 I went for a meeting with Peter Drissell, Director of Aviation Security and Michael Lee, Head of Airports & Airlines Regulation at the UK CAA. It lead to us working together to create the new Medical Device Awareness Card. The card covers both insulin pumps and CGMs and offers Type One Diabetics a practical, tangible solution. One that rules out confusion and uncertainty at airport security.

The MDA card launched in February 2019, just in time for all those half-term holidays! Info on one side is for Security Officers, with important advice for passengers on the reverse. The card has full backing from the UK government. So you should be able to find a poster with more details at your local NHS clinic.

So, where do we go from here? Our next step is to push the MDA card out globally, so that passengers with type one everywhere can travel with some peace of mind. We’ll be presenting the Medical Device Awareness Card at the next EU Regulatory committee meeting in September this year. We hope the Commission will endorse the card for EU wide use and okay the translation of the card into all the official EU languages.

The MDA card is also being submitted to the next ICAO working group, which is huge news! The ICAO is the UN specialised aviation agency, and it works with 193 member states as of the start of 2020.

Lastly, the European Civil Aviation Conference (ECAC) is Europe’s biggest and longest running aviation organisation. It is also a part of the ICAO air transport global community. They run Security Forum meetings for experts across all 44 ECAC Member States. Their next meeting is set for October, and I was invited to attend a dedicated session to present the card to the Forum. Paris, here I come!

This campaign is my passion. It means so much to me, and I will continue to pursue it until George and insulin pump users everywhere are guaranteed a stress-free and safe experience at airport security, wherever they are in the world. Just like everybody else.

Rachel Humphrey is looking forward to celebrating both the 20th anniversary of Universal Freight Organisation and 10th anniversary of Project Cargo Network in 2020. Running her companies is her other passion, as well as overseas adventures with her family, watching UFC/MMA and practicing yoga.